I stopped for my first cup of coffee this morning.

If being a mommy is supposed to allow you to thrive on 4-5 hours of sleep, I seem to be an exception.

In other news, both K and I seem to be transitioning well.  He has taken to Mima very well, and has shown her lots of smiles.  Aside from being exhausted, I have returned to the working world with relative ease.

There will still be a “wordless” post later today.  Stay tuned!

Ok, so there are probably no skeletons in there, but there is certainly some CHAOS GOING ON.

I like to think that J and I keep our house picked up.  Admittedly some things have a strange home…(crock pot in the hallway closet, china in the spare bedroom, J’s dress shirts in a spare bedroom, luggage crammed behind K’s dresser, canned green beans in the laundry room.)  But they do in fact HAVE a home, and I can generally tell you where that home is, including which drawer most kitchen gadgets are in.

But I have a confession…my name is M and my closet is a disaster.  I had it nice and organized when we moved in last spring.  Then I went on a diet and a few things got shifted around.  Then I got pregnant and bought a few early maternity clothes.  Then I got largely pregnant, and had to exclusively wear maternity items, but refused to clear a spot for them, so it got ugly fast.  Pants weren’t on hangers, but draped over top of my “skinny” pants.  Maternity, large non maternity, and clothes I borrowed from J were all mixed in where ever they would fit, and if they didn’t fit, I semi folded them and crammed them in the corner.

Even our dirty laundry, which was usually organized by “load” in one of four white baskets got hectic when I started using two of those for K’s room without replacing them.  Add in some bathrobes, a vacuum cleaner, and a jewelry cabinet, and I’ve got a mess on my hands.

Better yet, DO judge, that’s partially why I’m showing you. 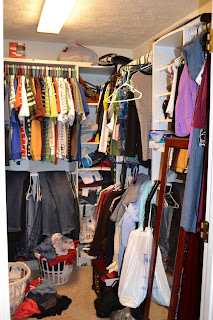 And yes, those neatly organized polos belong to J.  Annoying.  🙂

Anyway, my hope is that by showing you a “before”, I’ll certainly have to be motivated to show you an “after”!

The reason I keep putting it off is aside from straightening it up, I need to completely go through everything in there.  There are maternity clothes, clothes that were too small BEFORE I got pregnant, worn out shoes, and things that may fit but I never where them.  In fact, among this mess is one pair of jeans that fit, a handful of favorite work shirts, and a pile of t-shirts that I wear all the time.  I don’t even know what the rest is!

My reward for going through the mess?

A shopping spree!  I have Christmas money, Birthday money, and gift cards that I’ve been saving for when I lose the baby weight.

Here’s hoping I can show you a couple of after photos…sooner rather than later!