Ok, ok.  Two weeks…and two days.  Mama is still getting the hang of time management with a newborn.

K is doing great!  He’s filling out and has the cutest belly ever.  We had a fussy Saturday night, followed by a very hungry Sunday, and an even hungrier Monday.  Many websites claim babies have a growth spurt at two weeks…and we are believers!  He has certainly gained weight, and J even swears he seems longer!  Maybe it’s just that he’s finally stretching those long legs out more.

K hates being changed, getting dressed, being bathed, or anything other than being warm and snuggled.  He loves eating, napping in his swing and bouncy seat, and of course…being snuggled (which his mama also enjoys.)

He now focuses in on our faces, will look toward overhead lights and ceiling fans, and has taken an interest in his hands.  He eats them more than he looks at them, but it’s fun to watch him discover them.

His eyes have lightened, but I still consider them gray.  It does look like they’ll turn blue or hazel eventually.

He eats every 2 to 3.5 hours during the day, and is starting to be awake more during the day.  At night he eats every 3 to 4 hours, sleeps well in between, and still lets us put him back in his bed even if he isn’t asleep yet.

He goes back to the pediatrician on Friday for his checkup.  He’ll also get to meet his remaining cousins this coming weekend.  So he has a big few days ahead of him.

Speaking of “big day”.  I was officially allowed to drive, and lift more than the weight of just K as of yesterday.  So he and I celebrated by getting out of the house today.  We went to the bank, and of course…Walmart.  He did well!

He’s a good baby, and brings joy in to our lives each and every day! 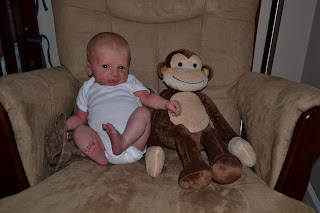 And here are a few other pics: