Be sure to “check” in below by letting me know where you’re reading from!

Here are some facts about five month old K:

A moment I don’t want to forget:
On a recent night, K fell asleep in the living room while nursing.  His little mouth was hanging open, face relaxed, arms were jelly…he was OUT.  J and I had been carrying on a quiet conversation.  I said “he’s asleep” and started to get up.  J walked over and said “Do you want me to put him to bed?”.  K bolted awake turned his head toward J and looked at him with quite a serious face.  As if to say…”I’m not going ANYWHERE!”.  We both got tickled, and I said “you were supposed to be asleep!”.  He just smiled really big, shut his eyes, and went right back to snoozing.Here’s the little man at five months… 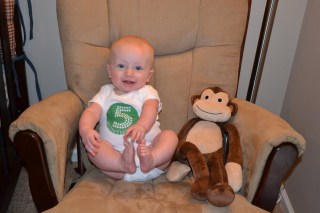 And here’s his photo shoot (a very “energetic” session this time!)