I found the recipe on pinterest thanks to this gal’s blog, then made some of my own edits.

The original recipe called for:

I strayed from that more than I meant to. I ended up dumping the whole box of cake mix in, then used 8 oz of cool whip, and two small containers of plain yogurt.  Not because I thought that was the perfect mix, it was just what I had.

I stirred all that up, added in a few more sprinkles, then chilled it.  It firmed up, but not enough that you couldn’t scoop it up with a vanilla wafer.  SOOOOO GOOOOD!  It would make a perfect party dip! 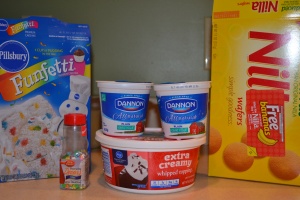 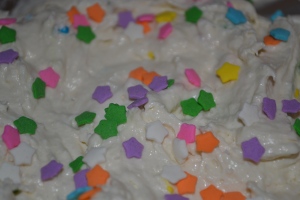 And since I made a lot, I’ll be partying all week!