Today was day 4 of the EEG study.  Neither L nor N are completely seizure free.

N’s had reduced, we believe, with the Phenobarbital and Keppra.  But the sub clinicals ARE still occurring.  He’s starting to come out of the fog.  This afternoon he was more responsive during his routine “care” cycles.  We even saw him stretch, flex some fingers, and peek…just barely…and show us his eyes.  He is now taking both of his orally, and is IV free again.   If he remains stable for a few more hours, his EEG should be off soon. (Hopefully overnight)

L was having more seizures than N, and while they’ve reduced some, he is still having quite a few.  They tried 4 different drugs, and at one point he was on 3 at once.  Meanwhile, he is sooo sleepy.  He is virtually knocked out from the combination, and even retained fluids and got very puffy over night.  The versed was never a long-term solution.  It has to be administered via IV.  It also makes them too groggy, and can be unsafe for at home care in case they get so sluggish they stop breathing sufficiently.  Regardless…it didn’t help anyway.  Given all of the above, they took him off of the versed IV, and are going to use the next 24 hours to see how he reacts to being on just the Pheno and Keppra (both oral).  If he does “ok”, or if the seizures remain controlled enough…they’ll continue with both as oral, and he, too, can get rid of his IV.

We knew that controlling seizures would be one of our biggest battles. It is the view of the neurology team that this may be as good as it gets seizure wise for these boys.

The dilemma for us as parents is that we don’t want to medicate the seizures away only to turn the boys in to lethargic, unresponsive (adorable) dolls.  While we know the boys will have some limitations, and the seizures themselves are frightening, we will never know what the boys are capable of if we medicate them in to an unresponsive state.  That will continue to be a battle.  We want to medicate them enough to help reduce seizures.  But we also want them alert enough to be themselves.   What is enough?

Meanwhile, here are the day 14 pics.  L doesn’t look like my L right now…but this is what day 14 brought us.   Mama can NOT wait to get these boys EEG free and get back to snuggling.

N stirring around a little 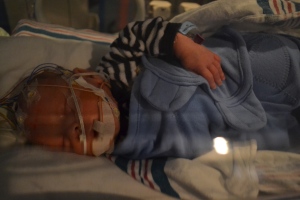 “Enough” has been a recurring theme throughout this.  I want to be strong enough.  We want to do enough to give the boys the best chance we can.  I want to be enough for K even though we know our new home life will be far more demanding.  J and I want to remember to take care of our marriage, and be enough for each other.

One thing I have learned though, is that no matter how hard any particular day seems, there is always enough.  Enough strength, enough support, enough grace, and enough hope to keep going.  I feel like that is part of the promise God has given us.  One day at a time.  And He will continue to be enough.

My grace is sufficient for thee: for my strength is made perfect in weakness.

Back for more updates!  The battle continued to cease the seizures today.

Our seizure updates are typically a few hours behind.  The EEG technician gives info to the neurology team.  The neurology team generally comes up to visit in person once per shift, but otherwise passes info along to the LPN or NNP on the floor.  the LPN or NNP stays in communication with the nurse, in particular with regard to dosing instructions.  And usually, we get our frequent updates from the nurse.

So…with that game of telephone in mind, here are the latest updates as we understand them:

N DID continue having seizures after the Keppra afterall.  They did slow down significantly though.  And the “one seizure” was actually one 3 minute seizure, compared to others that were much shorter.

L continues to have seizures.  They tried a 3rd medicine over night last night, and it had no impact.  They dropped the 3rd medicine, and tried a 4th, Vespid.    So he’s now on phenobarbital, keppra and vespid.  The latter two are via IV, so he had to have a 2nd IV added today as well.

In the meantime, the boys are relaxed and snoozing.  And getting even more fantastic visitors!

I wasn’t going to post today, but we have slight improvements that I wanted to share.  I mentioned this morning that we hadn’t quite knocked out the seizure activity with the Phenobarbital.  The second drug of choice (in addition to, not instead of) is Keppra.

J and I understood the details slightly differently, but our combined understanding is that N hasn’t had a seizure since they started Keppra, and L’s have finally slowed down significantly.  We believe he has only had one seizure this afternoon.  Now…that was all after a loading dose, so they haven’t settled in to maintenance doses yet.  That means there may still be some work to do to settle on a maintenance dosage.  But at least we’re seeing that the combined medicines are helping.

We met with the weekend neurology team and asked some questions, few of which could be answered.  We are hoping that a non seizing brain is more productive than a seizing brain.  But no one can be sure what these brains are capable of.   We asked if the seizures were focused in one particular area, and the answer was no…they were happening all over their brain.  That isn’t surprising since their particular area of concern is the entire outer layer of brain.  We are concerned about the sedating effect that seizure medication can have.  They said that generally the patients become accustomed to the dosage, and that drowsiness wears off.  Hopefully that will be true for our boys.

Nonetheless, it feels better to know that we might be close to getting these boys seizure free.  Other than the obvious reason of wanting the seizures to stop, that also gets us closer to getting them off of the EEG equipment and in to our arms. 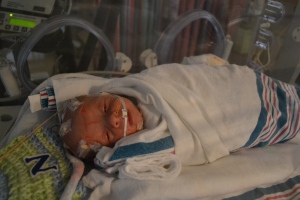 L is praying too 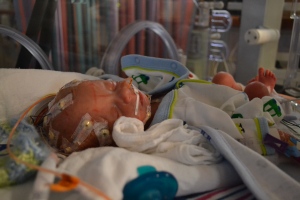 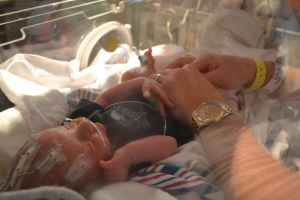 In other uplifting news, I was surprised with some visitors this morning.  I knew my brother was coming up, but he brought a crew with him!  Aunt Pam, Uncle Lanny, Eric and a Pay Day Bar were also on board! 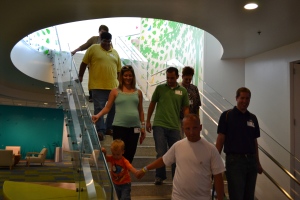 Since we can’t handle the boys a lot right now, and since K was in for a visit, it gave us an excuse to just…play! 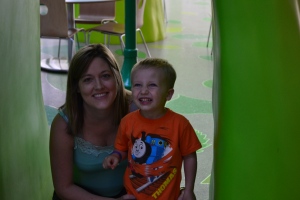 K was such a big boy.  We are so proud of how he has been handling the shuffling the last two weeks.  We are so thankful for the friends and grandparents who are helping us with him.  He is adjusting well, staying happy, and brought us so much joy this weekend.  A fine big brother indeed.