Both boys are still eating great!

L had a big temp drop.  I don’t think that will keep him from discharging but it is a reminder of how hard we will have to work to keep their temps on target.

N failed room air…again.  That one hurt.  He has had lots of chances, and seems close.  But this time he let his levels drop within 5 minutes.  We will have to start talking about oxygen at home.  The good news is that means he can get home sooner.  But I am bummed that he still needs it.

Nonetheless…operation homeward bound is on!

I mentioned in my last post L had his tube removed and was going on a 1-3 day “sink or swim” feeding challenge.  I stayed there last night to help with the boys’ overnight cares, and he did fantastic.  He finished EVERY BOTTLE.

Unfortunately…at his 9 am and noon bottles today, he only drank about half.  But he went back to full bottles afterward and per the update I just received drank extra at the 9 pm care to help make up for the missing volume.  Hopefully he can maintain an overall daily volume that will allow him to gain a healthy amount of weight.

In other news, N overheard the plan and jumped in the pool as well.  🙂   He drank all but 25 mls by bottle yesterday and every drop over night.  They were so pleased they removed his tube this morning as well.  He is now on the same challenge and has been drinking great today too.  🙂

Here are some pics of our little pumpkins: 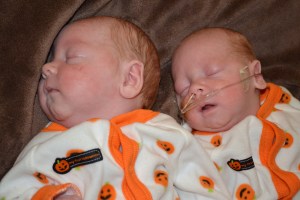 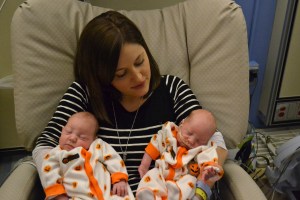 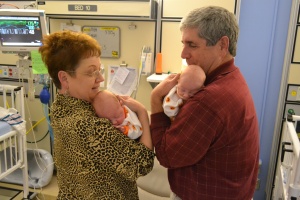 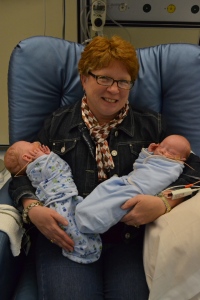 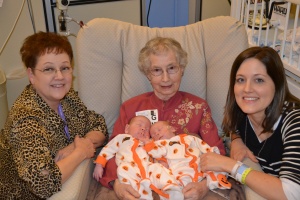 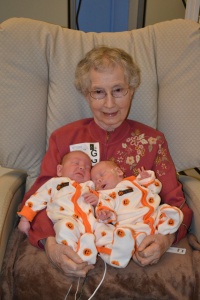 Here’s a photo for a particular group of coworkers who keep sticking their neck out.  😉 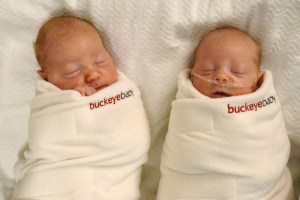 And here’s a shot of the brothers, celebrating their due date!!  Big plans indeed. 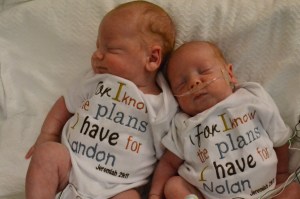 It’s been a busy few days.  So I haven’t yet told you that I really like the Neonatalogist that began a 3 week rotation this week.  He explains things well, is easy to talk to, and seems to have a good mix of “by the books” and “let them be babies” in his philosophies.  L was crying and ready to eat (early) during the rounds on Monday morning.  That was his first time seeing L.  During his brief exam, he said sometimes the babies just know what they want.  And we should listen.

He then mentioned that as well as he was eating, we should try him without a tube soon.  WITHOUT A TUBE.

I’ve been so fixated on getting them to drink enough by bottle to get approved to go home, that I kind of forgot going without a tube would be the preferred outcome.

After another stellar day yesterday, he made the decision during this (Tuesday) morning’s rounds.  L would “sink or swim”.  That’s when they remove the tube entirely, and give him 24 hours to drink entirely by mouth.  If he refuses a bottle, or won’t finish a bottle…there’s no tubing the leftovers.  If he wants a little more…that’s ok too.  In other words, L sort of gets to be in charge, but bottle is his only option.  If he does ok, he gets a couple more days to continue.  If he sustains or gains weight as he should…the tube doesn’t have to go back in!!!

Our little buddy is swimming.

We’ll see if he continues this overnight.  I have high hopes.  I also have a front row seat.  I’ll be pulling an all nighter at the NICU tonight.  (Known as “being a mom” to those of you in the normal world.)