It’s been another busy few days!  I feel like I say that every time…

We’re continuing with the plan to experiment with seizure medication.  So far, N is completely off of Topemax, but we didn’t see a huge change in him.  A small increase in alert time, but not what we were hoping for.  L has responded very well to pulling back his Phenobarb level.  As a result, we’re pulling N’s level back as well.

Here are some of the exciting updates since my last post:

A confusing update…when we showed up today, N was on a pump to regulate his tube feed at a slow pace.  I’m not opposed to a pump if it is for a good reason.  (Might be particularly beneficial at night when we want a slow safe feed since that’s when the boys will be laying down and less supervised…and spitting up after a bottle could be risky).  But that wasn’t the reason…  When I asked why he had one our nurse said it was in response to a cardiac event.  (Dip in his heart rate).  He had his first one in 6 days this morning, and it was a mild one.  I don’t think that justifies a pump, so I’ll get more information tomorrow.  This team hasn’t met me yet…so hopefully my first morning of rounds with them isn’t a bad impression when I ask “why” more than they are used to.   But they’ll get used to it soon enough.

Other updates and pics:

The boys and their NICU “neighborhood” were moved in to a newly renovated NICU area.  It was fancy, white, clean…and awkward for twin moms…  Being with one baby meant looking at the other through sound proof glass.

L helped by holding his own pacifier in.

I got this mom, you tend to the little guy.

Another baby holder showed up just in time!  Aunt Jen visited, and helped keep some loving arms in each room.

Not long after I was comfortably unpacked, we were told we would be moving again.  But this move isn’t renovation related, it is because the boys are no longer in need of in-depth acute care.  They are now in the “step down” unit, where you go to grow and work on normal goals.  🙂  They will likely be in their current spots until it is time to go home.

L’s reaction to the news (he seems skeptical?) 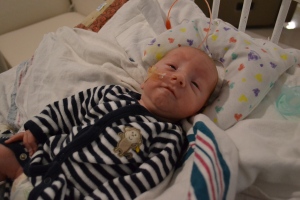 On the move again!

I actually see this “step down” unit as a “step up”.  We have natural light through big windows just around the corner.  The bathroom and pump room are much closer than the previous ones.  The boys are as close to each other as they’ve ever been.  (Look for some shots of us holding both babies soon!) We even have a TV now!  Maybe I’ll spend less time staring at the baby monitors.  And of course…this is a sign we are closer to going home.

While we were in the process of this move…more loving arms arrived! 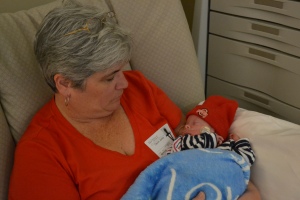 Smiles all around (N)

Lil Helper, and I believe N is reaching out! 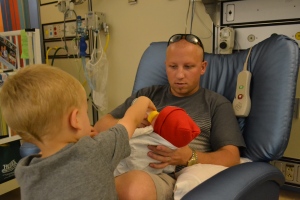 And of course, since firecracker was with us, we made time for playing… 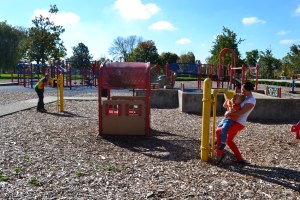 Try not to think about the germs 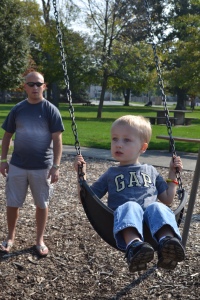 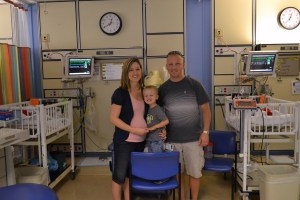