I’ve left you hanging on the babies.  You have been faithful and deserve better.  But I promise it has been busy around here.

The Winter Ick has hit us hard.  J and K were sick off and on for almost two weeks.  The babies and I stayed clear!  Until we didn’t…

N had a little fever…but really weird breathing that had his doctor and I worried.  So we went to the ER to look at his lungs just in case.  They were clear, his fever cleared, the breathing returned to normal, and he acted like nothing happened.

L, however, is actually sick.  He’s been fighting a cold for a while.  I’ve been trying to keep him upright as much as possible.  He’s sleeping in a bouncy chair, with his somewhat crazy mom sleeping right beside him watching him breathe.  I was also trying to hold him upright during the day as much as I could…until I also got sick.  And it seemed riskier to potentially expose him to what I was coming down with.  Nonetheless, we’ve been cautious with him.   We had a nurse check him on Sunday.  She confirmed that we were doing some good things, like keeping him upright, bringing him in to a steamy shower, and running the humidifiers.  I left him a mess so she could see his gunky eyes, stuffed nose, and hear his cough.  But his lungs were still ok.  On Tuesday, he stopped eating.  Well…he kept eating, but he couldn’t keep it down.  He would spit it all back up within a few minutes.  I called a nurse back (thank goodness for home health) and this time she thought his lungs sounded different from his norm.  She called our pediatrician and the decision was once again…lets look at his lungs just in case.   One six hour ER visit later, L had slight pheumonia, but was allowed to go home.  We’re doing antibiotics, and following up early next week.  He’s being such a trooper.

In other family news, K has been potty training, and doing great!

We enjoyed Christmas with lots of family!

Our quietest New Year yet became my favorite!

I would love to say that the Christmas presents are all put away, and cards were mailed, but both would be lies.  We did at least undecorate.  And put out the kids new toys and changed out their clothes.  I’ve also been working with the usual suspects, (Insurance, Labs, our medical teams both local and the specialists, and Help Me Grow).

AND I’ve mentally preparing to go back to work!  (More on that later) 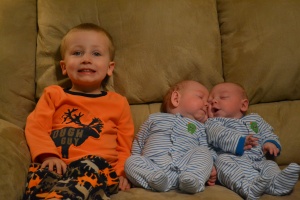 3 thoughts on “Where Have You Been Young Lady!”