We are settling in for a quiet night after a busy day.

The twins and I are at our new children’s hospital.  To catch you up…

We had a GI appointment at 9:00 am this morning, resulting in a 4:00 am alarm time.   This was scheduled at my request and at the recommendation of other physicians.  The boys still eat everything by mouth.  We are thankful for that!  But they are congested often, and during many of their feeds they have coughing, sputtering, or stridor.  They also spit up large amounts frequently, particularly if they are dealing with mucus.  This was a consultation, during which we talked about their history, and agreed further study is needed.  An analysis by their speech therapist, and a video Barium swallow study have been scheduled.

On the neurology side, we are also here to begin ACTH, the steroid based treatment that will hopefully help stop their infantile spasms.  You can read more about it here.  It will be administered daily by muscular injection.  I will be doing the injecting.  Gulp.  But let me back up first to explain how we landed here.

The boys have shown some improvements lately.  We believe Sabril is helping their infantile spasms, by reducing their frequency and duration.  But they are still having multiple per day.  ACTH has a higher success rate, but its side effects are also more frequent, and in some cases can be very hard on little bodies.  High blood pressure, out of balance hormones, irritability, restlessness, fluid retention and excessive weight gain are all possible.  Additionally, the boys will be immune-suppressed during the 6 week treatment and for a while after.  So while this is a highly used option, it is not without risk or cause for hesitation.

That said…it is our logical next step in this journey.  So…we’re taking the step.

Landon’s EEG was today, showing improvement in the sense some of the noise was reduced, and the signs of infantile spasms have lessened.  But it is still very abnormal of course.  Nolan’s EEG is tomorrow.   This will help us establish a “pre-ACTH” baseline.

They received their first dose of the new medicine today.  I observed one shot and then gave the other one.

You’ll find a picture below of a very brave Nolan after I administered my first injection.  He was quite the trooper!  And I was pretty proud of myself too!

In addition to the testing mentioned above, we will probably be here another night as they monitor the boys reaction to the new meds, and train me on the injections, as well as checking blood pressure and blood sugar.  Hopefully we will be discharged Friday.

Prayer requests are for ACTH to be effective, without harmful side effects, and that we can keep the boys healthy.  I also pray that as we remove the infantile spasms and reduce the background noise in their brains, two little boys continue to emerge and teach us more about who they are.  Because they are indeed something special, and worth getting to know. 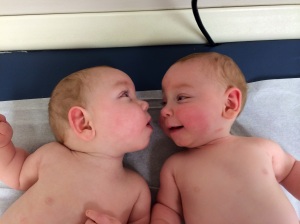 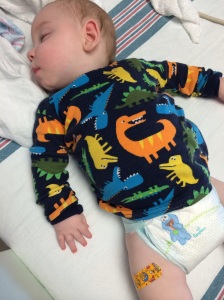 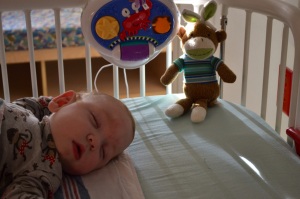 Landon relaxing once he found out I would experiment on Nolan first.