We awoke bright and early on delivery day. I’m not sure how much I slept in the first place. We had decided to spend that last night at home with our two year old, and drop him off for school as part of a normal routine. Thanks to some busy morning traffic that meant we cut it close on our 9:30 am arrival at the hospital, but we made it on time, even with a few minutes to spare.

Family had gathered in the waiting area. My parents, My Brother and his family. J’s parents. J’s brother. Our Pastor was a phone call away, and had planned to arrive by mid-afternoon. We made small talk but no one was feeling chatty or comfortable. I later found out that my mom and mother in law got emotional reading some of the final blog posts. They took turns visiting me in pre-op. No one was sure what to say. Neither was I.

Ironically, I was in early labor any way. Contractions were consistent, although not yet strong. Despite all of the planning and choosing of the date…these boys were about to arrive on their own choosing anyway.

I was taken back to the operating room to start the spinal. That process went as well as it could. There was so much anticipation coursing through my veins that I felt like I had been shot with adrenaline.

I was laid back, arms pinned, feeling helpless and out of control in so many ways as we began the wait for the medicine to kick in.

The Doctor announced to the room that we were expecting a lot of amniotic fluid and to be prepared.

I recall some quieter comments about “fragile heads”.

The neonatologists were awaiting two frail little guys. I had nurses. The boys had nurses. A neurosurgeon was in the room to take a quick look at their heads to assess risk of hydrocephalus. I’m not sure who all was there, but by J’s count there were over 25 people in the room.

Soon there were two more.

First to emerge was Landon.

“That’s a good sized baby!” I heard one of the staff from just behind my line of sight.

Just the whispers of a busy room.

“He’s breathing on his own!” I heard someone exclaim.

I lost it. Landon might not have been crying, but I sure was. Justin and I exchanged tearful prayers of thanksgiving just as Nolan, tiny and weak, was escorted by me with the same good news to follow.

Both boys were here and breathing on their own.

They brought the bundled babies over to me for a quick greeting. I was able to snuggle and kiss them both.

They then unswaddled them and hooked them up to the NICU monitors.

Two little miracles and their tubes and wires were rolled down the hall in isolettes.

The parade passed the anxiously awaiting family in the lobby and paused just for a few seconds to let everyone take in the sight of these boys.

There are no photos of this moment, everyone was busy staring.

I later found out that Nolan in particular looked so frail and lifeless, that more than one of those onlookers feared this might be his only day of life.

But he is a champ, as you may recall. And the journey for both boys was just beginning. 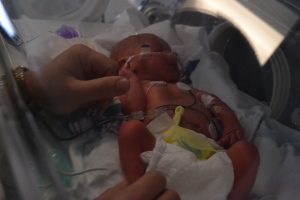 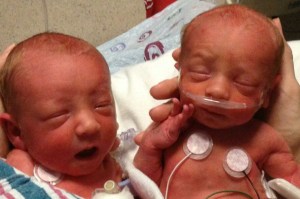 8 thoughts on “The Birth”