We’ve survived the long day.  The EEG was rather uneventful, which is good.  They observed no spasms today!  And sub-clinical activity appears to be better.  Aside from seizures lessening, their background “noise” also seemed a little better.  Their EEG is still very abnormal, and we know they still have occasional spasms even though we didn’t catch one today.  But all in all, that was great news!

We are working on a plan to let their Topemax hit max dose, their ACTH wean completely, then begin adding Onfi, then dropping Sabril.  Most of these changes have been planned, but we don’t want to move everything at once.  So it may take a couple of months to get to the goal point.

Their vision appointment was very long, and involved 3 stages.  Overall, their eye health is good.  Their optic nerve hypoplasia was downgraded to optic nerve dysplasia.  In terms we can understand…if the optic nerve is a highway, they are getting an estimated 80% of the traffic through their left eye and 60% of their right eye.  And the broken pathways do not appear to lead to a single large blind spot, but rather weaken the vision a little bit all over the eye.  They reacted very normally to light in their left eye, and near normal in their right eye.

He still attributes much of their delayed vision to their sub clinical seizures and background noise, as well as the sedating medicines.  He thinks if we can continue to reduce the noise, increase their alertness, AND potentially add corrective lenses, that we might be able to help the boys see better.  I know that was all very vague.  But it is hard to talk in specifics until we really see what happens.  We have more extensive testing scheduled on November 18th to zero in on their ability and hopefully determine what corrective options might help.

By the end of the day they were exhausted.

What they were NOT…is miserable.  You can’t keep these guys down! 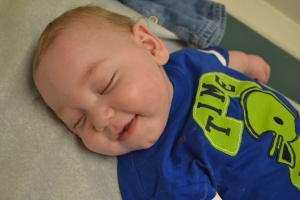 By the end of the drive home, I was also exhausted.  What a special treat to find dinner had been delivered to the house for us!  I am thankful for a successful day, a little progress, the opportunity to be the boys’ advocate, and for thoughtful people.