Here’s a treat from the medical staff:

Since arriving I’ve heard the words “improvement” and “better” with regard to the SOUND of Landon’s left lung.  The have brought in an infectious disease team to ensure they are utilizing the best mix of antibiotics, since his pace of improvement had previously been slow to non-existent.  They made a change today that will hopefully also give him a boost, and continue the improvement.

Landon is still very very sick, and is a vulnerable boy right now.  But it feels good to hear that he’s in the process of moving in the right direction, rather than still in a downward spiral.  Assumptions are still that he aspirated at some point, which led to a start of pneumonia, which spread aggressively between Monday and Wednesday despite everyone’s best efforts.   But we’re looking forward now, focused on improvement, and rooting Landon on.

And fear not, Iron Man is on duty, even when duty isn’t glamorous!  The entire nursing staff is dressed as super heroes today.  In other words, Landon fits right in.

A treat for mama:

Landon opened his eyes ever so slightly when I was talking to him about the last few days.  He was probably laughing about the tricks Nolan has played on us lately.  And oh boy have there been tricks.

And lastly, here’s a treat from Landon!

He is still on the vent, but is breathing with and over it.  He is also back to taking some feeds.  Ignore the tape mustache, and appreciate that this is one cute and tough pup!!

Landon’s chest X-ray today revealed that for the first time since Monday, the pneumonia did NOT get worse.  In fact, they saw a teeny tiny bit of improvement in the upper part of his left lung.  He still has a long road ahead of him, and that’s nothing to write home about (although I of course did, and sort of am again now).  But any good news is welcome, even in small doses.

I can NOT wait to get to him tomorrow.  This is the longest we’ve been split up, and I am not good at it, especially when he is so vulnerable.  Daddy has done a great job taking care of him though.

We continued the Halloween festivities here.  Tonight N got to wear L’s lion outfit.  He was not a fan.  And may have roared at me more than once. 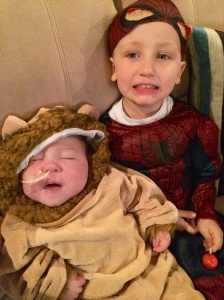 He was THIS happy to take it off. 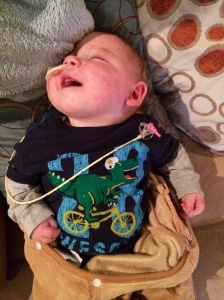 More to come tomorrow, when I am once again by Landon’s side.

Landon is still very sick, but is in good hands. It will be a quiet night as they continue to give his body and the antibiotics time to start fighting the pneumonia. We are hopeful that tomorrow will be the day he turns the corner. Thank you as always for the thoughts and prayers.