It’s been an interesting day.

First and foremost, they are treating Landon’s pneumonia.  Priority 1 is getting his lungs cleared up.  They did determine that the pneumonia is bacterial, so they are treating with antibiotics, as well as breathing treatments.  Landon is getting tuckered out from all the hard work, so they have bumped him to Bi-pap, and most recently (perhaps as we speak) to intubation.  Don’t be too alarmed by that (yet), he’s been working very hard for a couple of days.  Getting more assistance will let him recoup and rest up, while the antibiotics continue to work on the pneumonia.  Then hopefully after a couple of days we’ll see him start to clear his lungs, and regain some strength.

A second effort; what caused all of this?  The current theory is that his sodium got dangerously low.  Low sodium can lead to a seizure, even in a healthy adult.  Being that Landon is even more susceptible to seizures, it was a bad combo.  (This would also explain why it wasn’t his normal seizure).  The seizure, combined with an NG keeping his pathway open led to aspiration, and the aspiration led to pneumonia.  Shew!  If you’re asking what caused his sodium to drop in the first place, you are not alone.  Their current best guess is dehydration.  However, we weren’t seeing that at home.  In fact, thanks to the NG tube we were able to ensure he got his fluids even more so than normal, and he was having good diapers.  He ended up with diarrhea, but not until Sunday afternoon (after the seizure).  So while he may have ended up dehydrated by Monday, I’m not positive that was the cause of the sodium/seizure issue.  We may never know actually.

Nonetheless, we will make some dietary changes.  AND…we are headed toward a G-tube.  That was actually already on the agenda for the boys.  We had been in the process of working out scheduling, but this has escalated things.  And given the new aspiration concern, G-tube is safer, and a  better long-term plan.  While putting the boys through a surgery isn’t ideal, we are not discouraged by a G-tube.  It will make life easier in many ways, allow the boys to use their energy on more important things, AND we can still work on oral feeding skills, but without something irritating their throat.

Dr Dad has been busy, and has done well at keeping mama updated and at peace.  Here is a picture of our sweet Landon, pretending to scuba dive. 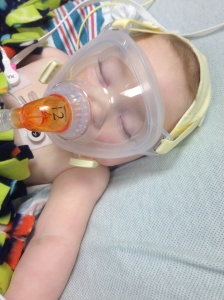 7 thoughts on “Cause and Effect”