Tuesday was a busy day at our Children’s hospital.  Up at 3:30 am, we got off to an early start getting organized and out the door.  Thanks to J for getting the boys changed and in their seats, and thanks to D for accompanying me on the trip for a very useful extra set of hands!

There were two planned appointments: Vision assessments for both boys, and a lingering upper GI appointment for Landon as a pre-surgery check.

Vision was first.  The boys have what is called Cortical Vision Impairment.  Essentially, it is a neurological (brain) rather than ocular (eye) based impairment.  We have a lot to learn about the boys’ CVI and Tuesday was a good start on that path.  They performed a few different tests to check response rates, and various other aspects of the communication from eye to brain.  I was allowed to help their eyes open for the first test, which involved a lot of strobe and blinking lights.  The second test involved simply colored, slow-moving shapes and pictures projected on to a wall in a dark room.  A video camera recorded their eye movements.  And they needed to actively participate.  Not surprisingly, Nolan surprised me.  He needed a few minutes, but eventually started clearly noticing and observing the wall.  I can’t say yet how the DR will assess his vision, or if there is much ability to work with, but I believe Nolan gave them the best test attempt we could have asked for.  Landon found the whole exercise silly, and chose not to participate.  🙂  But hopefully we can infer a thing or two from Nolan’s test.  And we’re already putting together some good therapy ideas.

The Upper GI went well, and they observed what they needed to for Landon’s pre-surgery checkout.  In the meantime, they were able to confirm the proper placement of Landon’s NJ tube as well.  Speaking of which, that bring us to the unplanned detour of the day.

Monday night, Landon’s tube quit working.  The pump would alarm, and did not fix even after replacing the bag and hookup.  We tried manually clearing his tube, but could not budge any liquids in or out.  Since it was already evening time, and he would have to fast for a few hours before his upper GI anyway, we decided to stop attempting feeds, and let the hospital determine what was wrong. Unlike the NG tubes, we can not move or replace Landon’s NJ tube without help from radiology.  I told D the plan Tuesday morning, and she agreed we were fine skipping the small amount of formula, and commented about what she used to do to fix that issue.  So in between Vision and the Upper GI appointment, we visited radiology for an NJ check.  Between waiting to get squeezed in, and a lengthy registration process, we ended up filling up what was supposed to be our relaxing two-hour lunch break.  During that time, the nurse joked about the same home remedy D mentioned.  So after a two-hour wait, that nurse checked in their “supplies” and found one remaining can of the secret ingredient that works great at unplugging tubes. 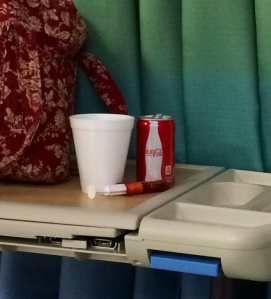 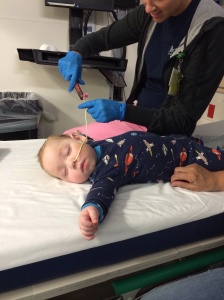 It took some pretty strong pushing, but sure enough, the tube cleared up with a little Coke. I’m not sure if that’s a commercial for it or not.  But nonetheless, we now know a quick fix at home.  And sweet Landon had an unexpected first.  His first Coke. 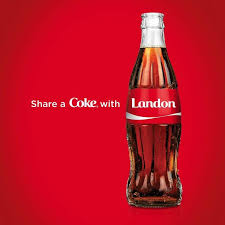 2 thoughts on “An Unexpected First”