Today was one of the best days Landon has had in a while.  He was smiling, cooing, kicking, and having a blast.  Not to mention…we were at appointments all day, which typically wipes him out.  So all things considered, today would have been a fantastic day no matter what.

But it is even more special when you contrast it against how he was doing just yesterday.  Landon spent the last several days in a fog.  Glazed eyes, lethargic, sleeping more than normal, and unresponsive.  His stats were fine, no fever, and no sign of an acute illness.  This isn’t unheard of, and I’ve seen other Liss parents talk of the same.  For the most part you just wait it out, and celebrate when they “return”.  One unfortunate side effect…Landon seems to swallow less during these phases too.  Which means he ends up getting choked on his saliva.  After two aspirations pneumonias, he’s at higher risk for aspiration events already.  But when he seems to be fighting a losing battle, it’s hard to watch.  You feel helpless, like you’re just waiting for something bad to happen.

He works so hard to fight through this.  We do what we can to help him. That includes increasing his respiratory treatments, watching his vitals, positioning him well, but also moving him around a lot.  I was even on the phone with pulmonology a few times.  Then we hope and pray for the best.

I of course want to show you how great he looked today.  But I’ve decided to also show you what a bad moment looks like too.  If you don’t want to see it, just skip to the second video.  This is an example of Landon struggling yesterday.  This was videoed intentionally so we could show pulmonology and neurology today.  We typically help suction him when this happens as well.  This can happen no matter whether he’s sitting or laying down.  And it happened often from about Thursday to Monday this time.

But then, when I returned home yesterday, Darra said “I think he’s coming back”.  Sure enough, he perked up the rest of the evening.  And here is today, being the bright eyed boy we crave each and every day.

Not to be left out, here’s Nolan looking adorably exhausted after a long day. 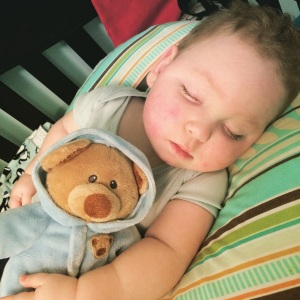 I suppose one of my goals here is to thank you for the ongoing prayers, and for the special thoughts and prayers when requested.  But I also wanted to show you a little bit more of what you’re praying for.  And why a simple smile or a good day, is never to be taken for granted around here.

4 thoughts on “What a difference a day makes”