Our sassy pal from Sunday evening isn’t himself.  L occasionally drops seemingly unrelated clues to tell us something is up with him.   Sunday he was fussy and sad in the afternoon. That’s not like him.  Starting Monday, his urine output was low, and it has dropped each day since.  His temperature has been hovering lower and lower, and we’re working hard to keep him warm.   Monday night be vomited.  Tuesday he had a couple of seizures.

This is very similar to how things started last fall.  I spent 3 weeks taking him to the Dr, ER, and to get blood work, and everything consistently came back fine until he eventually crashed, and completely stopped eating.  So we drove an hour to a nearby mid range hospital, but were immediately sent on to a Children’s hospital two hours away.  (If you were following us then, you might also recall that N had a seizure and joined us that night, and also earned a trip to Children’s.  We’re a weird family!)

That was a 10 day stay at Riley, with what was eventually determined to be a virus.  He came home on an NG tube and hasn’t had a bottle since.  Within 10 days of coming home from that stay – he had a bad seizure on  October 25th that caused aspiration, leading to a PICU stay in St Louis that lasted another couple of weeks, and included being on the ventilator, and getting a blood transfusion.

And it started with being cold, and not peeing.

Back to current day:

L is currently cold, and not peeing.

We’ve learned to handle a lot, and be patient.  We aren’t ignoring it.  We just know that our baseline for L isn’t the norm.  Yesterday he finally reached a point where his heart rate was hovering too low, so we took him in to the ER for another opinion.  His chest xray came back clear and he had great oxygen levels, so no signs of aspiration from Monday’s event.  His blood work was hard-earned – but also came back clean.  No signs of infection.  His heart rate was hovering in the 50’s -60’s most of the evening, with an occasional dip to the high 40’s.  His temperature bottomed out around 91.  And he continues to withhold urine.  Despite all of the above nothing is “wrong” currently that we can do anything about.  We need to keep him warm, push fluids, and watch him closely.  We were on the fence about his bladder function, so they were going to do a scan to see if a bed side straight cath would be beneficial.  He must have heard that threat, because as they brought the ultrasound in, he peed!   The urine also showed no signs of infection or function issues.

So we went home!

He’s still cold, and barely peeing.  His heart rate hovered around 70 today, and he had a bit more spark in him.  We’ll continue to watch him closely, and hope he comes out of this soon.  All of these things are part of L being L.

Until someone tells me otherwise, I’m going to start referring to this as autonomic dysfunction.  I have some fellow Liss moms to thank for the terminology, and a friend/DR for helping confirm it isn’t a bad theory.  It is my belief that neurological activity (seizures for example) disrupts L’s systems, and we see the effects of that until he settles back in to his own baseline.  (Temp instability, heart rate, bladder function, digestion, lethargy, etc).  History tells us to worry about aspiration during these episodes.  He is more prone to vomit, and less able to protect his air ways.

But so far, he is holding strong.  In his own way.  And being strong is part of being L too. 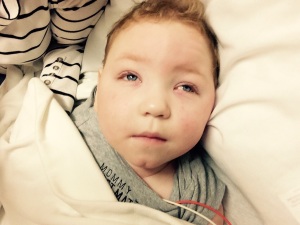