I’m addicted to Pinterest.  Addicted.  I’ve had my eye on this recipe from Cully’s Kitchen for quite some time.  After reading comments, I could tell it was too big of a portion for our crew of 2.5.  But halving the sausage and pasta didn’t seem like a smart idea either.  So…I sort of halved the recipe AND made a more K friendly pasta dish with the extras to eat/freeze.  Here are my edits to Cully’s pizza casserole, as well as a pasta dish K gobbled up.

In a bowl, mix 2-3 cups of cooked pasta, half a cup of cooked sausage, a small can/Cup of cooked veggies, and a couple of tablespoons of prepared pesto sauce.  Stir well.  Adjust portions to taste.  I had enough for 2-3 portions for K this week, and still froze a couple of portions for down the road.  He LOVED this.

Spread a little spaghetti sauce on the bottom of the casserole dish.

ENJOY!  Here’s a quick final pic of each: 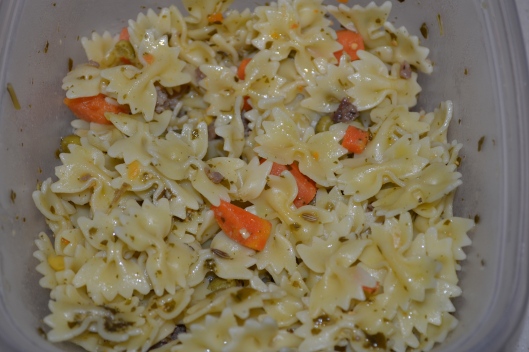 Here’s the latest edition of “K Noms”…it’s a yummy one!

I’ve seen multiple recipes that involve putting a veggie puree in to a muffin or cupcake.  These particular green beauties caught my eye.  Many recipes call for a from scratch cake.  And if that’s your thing – go for it!  But…here’s a super simple 3 (or 4) ingredient recipe.

That’s it!  The hardest part for me was making the spinach puree.  Our blender is…a bit old and busted.  I ended up using an electric chopper to get it mostly chopped, then I put the spinach and applesauce in to the blender for a final blend.   That worked well.

The final texture is a tad spongier than a normal cupcake or muffin.  The color is great, and most importantly…K loved them!  I had to cut him off at 3, but he was asking for more!

I’m giving these an A-.  The taste was great, and they were easy to make…but they ARE still cupcakes.   This makes me wonder what other healthy ingredients can be mixed in…more to come!  Here are a few pics! 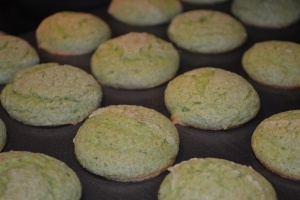 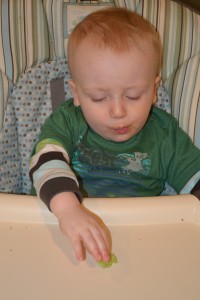 I’m not telling you anything you don’t already know.  Kids love pizza.

K is no different, and like many other kids, it’s also a struggle to get him to eat veggies.  So tonight, while making one of his mini pizzas, I decided to take the opportunity to throw on a new veggie.  It was a success!

K’s mini pizzas consist of one small 6 in tortilla (like for soft tacos), a tablespoon of pizza sauce, diced pepperoni and mozzarella cheese.  I microwave them for about 15 seconds, or put the assembled pizza in a skillet for a minute or two for a crispier texture.  Once they are warm and the cheese has melted a bit, I roll them up, and he GOBBLES them down.  I’ve even started sending one to day care 1-2 times per week.

So I started wondering if this might be a way to introduce him to some new veggies.  I can experiment with different ones, and as he gets used to them and realizes they aren’t evil, perhaps he’ll even eat them when they are NOT in pizza form.

The verdict is in…delicious!  I give these an A for our crew!  Quick, easy, and he ate every bite!  I’d like to try to sprinkle on bell peppers and fresh tomato soon.  Any other pizza veggie topping ideas?  Anyone else suddenly craving pizza?