And The Stomach Bug that Definitely WAS…and IS…

We celebrated K’s first birthday on Saturday!  But that did not come without some trials and tribulation.  Wednesday afternoon, the day care called at the end of the day saying K had a fever.  He stayed home with daddy on Thursday, and a quick trip to the doctor uncovered an ear infection.  Rx.  Antibiotic.  Better nights sleep.  Problem 1 solved.

Friday morning, after feeling good about our healthier baby, the day care called again saying K had thrown up and we needed to come get him.  Unsure if it was a bug or due to his antibiotic, I asked a few questions, and discovered 3 other kids were home sick as well.  K’s concerned mama texted and called the guests to warn them of a pending illness.  It was determined my brother and their 3 kids wouldn’t drive up, our neighbor and their daughter would not walk over, but everyone else was in it for better or for worse!  He napped the rest of the morning away, and woke up clapping.  No more vomiting.  A mildly rough diaper or two.  But overall great spirits.  Lysol sprayed just in case.  Lots of hand washing.  Problem 2 solved.

Saturday morning the traveling crew got off to a later start.  Combine that with snow on top of ice, and a bad washer fluid, and we had an ETA of somewhere between on time and one hour late.  In a weird twist of events, the car that left last arrived first, and everyone was here within only 20 minutes of the planned start time.  During that time K snuck in his morning nap.  And every one was ready to party!  Problem 3 solved.

Skip forward to after the party.  K ended up showing more signs of a bug that night, and continued to resist most foods and liquids.  By Sunday, I had it, a cousin had it, and an Aunt had it.  By Sunday night, count two more grandparents in.  The tally is still growing.  Do not feel guilty of you missed this party.  It seems our party favor was a bit ridiculous.  Problem 2 is back with a vengeance.  Please accept our apologies.

BUT!  In between the illnesses, long hours traveled, and snow…we had a party!  And I can assure you, it is one we will never forget!  To show you that all was not a complete loss, I’m sharing some pictures of a happy birthday boy.

The theme was Mod Monkey.  That seemed only appropriate since we’ve tracked his growth on a monthly basis with a stuffed monkey.  If you have no idea what I’m talking about. check out K’s Korner along the top links.  Here are some pics of the decorations.

And here are some pictures of the days events.  A little balloon fun and ring toss got the party off to a fun start. 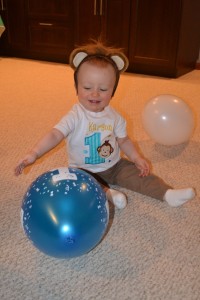 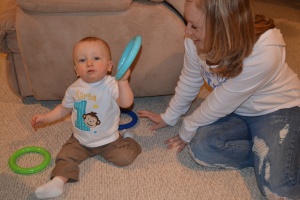 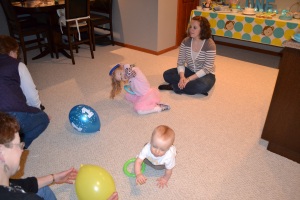 After a quick lunch, it was present time! 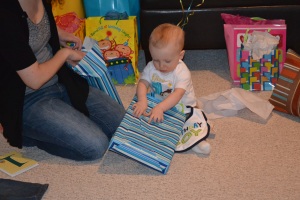 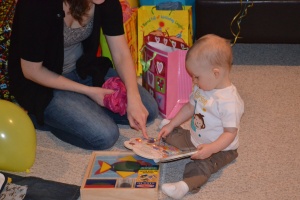 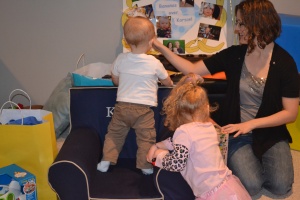 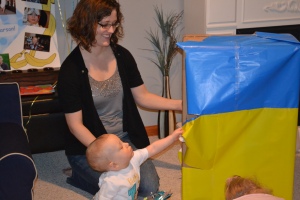 Cake and ice cream were up next!  K wasn’t feeling up to eating much, and that included his smash cake.  But he was a trooper throughout! 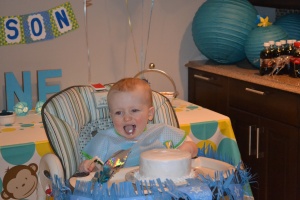 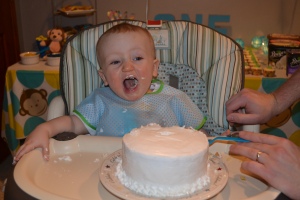 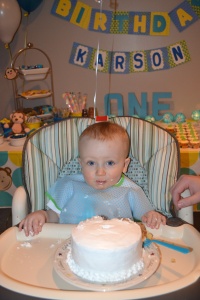 Once the sugar high kicked in, it was play time for all! 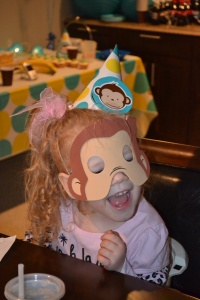 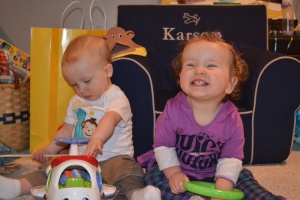 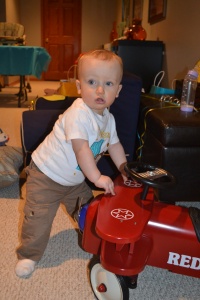 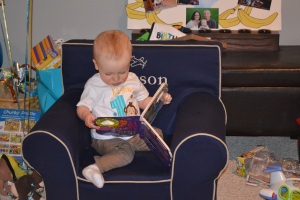 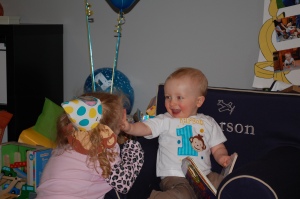 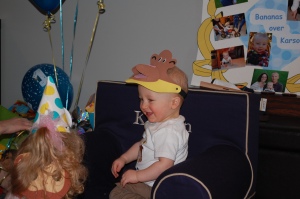 Dearest K, you will not remember your first birthday party, or all of the efforts your mama put in to preparing it.  But someday, if you ever look back on the pictures, or hear stories, you can know one thing – not even a snow storm and a stomach bug could keep us from celebrating you!