Today was a relatively quiet day.

There were no changes in seizure medication.  Neurology stopped by, and confirmed they would run a short-term EEG tomorrow or Friday to see if the Topemax is helping at all.  L was sleepier again today.  We mentioned that innocently, but I could tell that caught her attention.  She said that could be the medicine, or it could be a sign that sub clinical seizures are tiring him out.   I wasn’t thrilled to hear that given that so far the tally is:

L is still puffy…but he’s improving.  Both boys are now on a little bit of oxygen.  They are breathing more shallow, and their stats are drifty at times.  (Letting their oxygen level drop; also called a “desat”.)  The level they are receiving is low, and we are blaming it on the medication for now.  Hopefully they will get accustomed to the medication, and outgrow the need for breathing support soon.

We spent today catching up on snuggle time.  The boys love it, have better stats and seem so relaxed.  And…based on the amount of napping I did today, it seems I find it relaxing too. 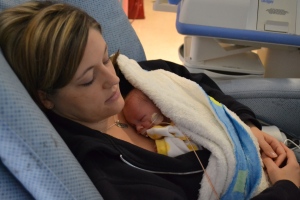 A peek at both boys: